You are here: Home / Blog / NBA / What Exactly Is The NBA Play-In Tournament & Why It’s Causing A Stir 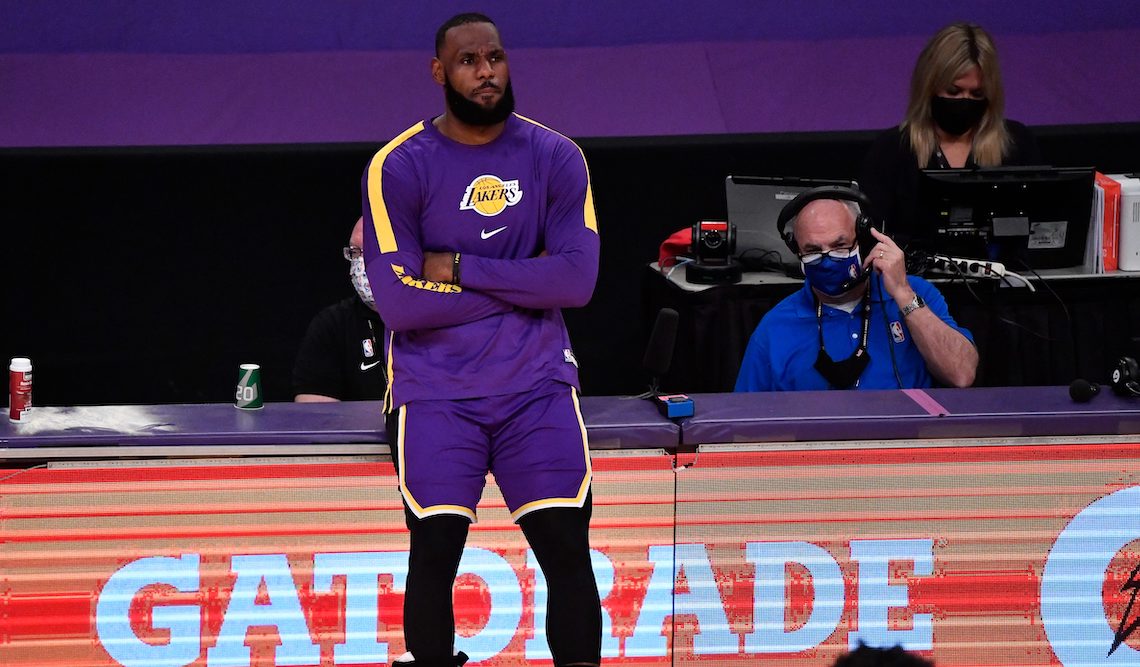 LeBron James, recently back in action for the Los Angeles Lakers after a six-week ankle sprain recovery, is particularly upset about the new setup.

LeBron James on the play-in tournament: "Whoever came up with that s— needs to be fired"

What’s so bad about the NBA’s play-in tournament? And why are some players, coaches, and owners up in arms about it?

How the NBA Play-In Tournament works

The play-in tournament occurs in the short span of time between the end of the regular season and the beginning of the playoffs.

The second half of the regular season will be followed by the 2021 NBA Play-In Tournament, May 18-21!

Teams with the 7th-highest through the 10th-highest winning percentages in each conference will qualify to determine the 7th & 8th seeds.

The teams that finish in first through sixth place in their conference are guaranteed to move on to the playoffs, so they get to bypass the play-in tournament.

Teams ranked seventh through tenth, however, have to complete for the chance to play in the postseason.

The teams that finish seventh and eighth in their conference get two chances to get a playoff spot; the teams in ninth and tenth get just one chance.

There are three games in each conference to determine the final standings:

Playoffs proceed to the first round once the play-in games are complete. The teams which do not secure a playoff spot enter the NBA draft lottery.

Why was the NBA playoffs format changed?

For the 2020-2021 season, the league decided to use the same approach. The play-in tournament determines conference standings according to winning percentage, so teams with COVID-19 complications this season won’t be affected by an uneven number of games.

Perhaps even more appealing, however, is the play-in tournament’s thrilling lineup of games.

From May 18 through May 21, fans will be treated to high-stakes games to determine which teams will have the chance to secure the #7 and #8 seeds.

Additionally, the chance to secure a playoffs position keeps teams playing competitively right up through the final games of the regular season; throwaway games aren’t as likely, which makes for better entertainment.

Who will complete in the NBA Play-In Tournament?

Conference standings are still up in the air. We won’t know for sure which teams will compete in the play-in tournament until the regular season ends on May 16.

But as things stand today, it’s possible to venture a guess as to which teams are most likely to fall within #7 to #10 within their conference.

In the East, the teams that seem likely to end up in one of the play-in tournament games (as reported by ESPN) include:

Teams that are considered to be seeded for automatic advancement to the playoffs include the Milwaukee Bucks, Brooklyn Nets, and Philadelphia 76ers.

As for the West, top contenders for the play-in tournament include:

Who’s against the play-in format?

There are some players, coaches, and owners who don’t support the use of the play-in tournament to determine playoff seeds.

It seems that a team’s likelihood of ending up in the tournament is correlated to their lack of support.

As the L.A. Lakers have lost six of their last seven games (falling 121-114 to the Toronto Raptors on Sunday), Lebron James has become more vocal about his opinion.

Interestingly, a number of players and other people affiliated with the NBA were strongly in favor of the play-in tournament format last year during its debut.

One of the pros that was openly supportive of it? LeBron James.

Mark Cuban, owner of the Dallas Mavericks and member of the NBA Board of Governors, has also piped up about play-in possibilities.

He previously voted in favor of using the play-in format for the 2020-2021 season, but later called it an “enormous mistake.”

Why the change of heart?

Like the Lakers, the Mavericks have also had few tough weeks that put them very much at risk of falling into the #7 through #10 spots in their conference, making the chances of a play-in tournament appearance much higher.

In fact, Dallas Mavericks star Luka Doncic first voiced displeasure with the play-in tournament plans right as the Mavs were hitting a rough spot in the season.

Besides team standings, however, there are also some practical reasons why the play-in tournament has been controversial this year.

The biggest factor is the toll the tournament could take on players.

This was a 72-game season, and due to schedule changes during the pandemic, the offseason beforehand lasted less than three months.

And with the play-in tournament sandwiched so tightly between the end of the regular season and the NBA finals, these additional matchups give players little time to rest.

For now, the change will only affect this year’s playoffs. It’s unknown whether the league will continue with the play-in tournament in future seasons.

The Olympic Games are often defined by the feats achieved by the all-time greats. Whether it’s Jesse Owens in Berlin, Muhammed Ali in Rome, Mark Spitz … END_OF_DOCUMENT_TOKEN_TO_BE_REPLACED

Everyone has heard it: a mid-game buzzer that simultaneously causes cheering or disappointment, excitement or dread, depending on which team you're … END_OF_DOCUMENT_TOKEN_TO_BE_REPLACED

Just say the word "Madden" and football comes to mind. John Madden is a cultural icon, whether it's from his time as a Super Bowl-winning coach … END_OF_DOCUMENT_TOKEN_TO_BE_REPLACED