You are here: Home / All The Lingo / Sports Terms That Begin With ‘U’ / Up And Under

What Is The Definition Of Up And Under In Basketball? 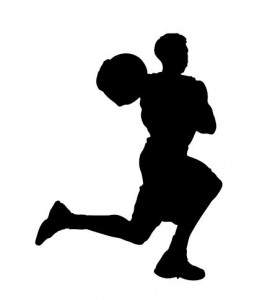 1. This is an offensive move in basketball when the player fakes out the defender by acting like they are going up for a shot, but doesn’t. Once the defender leaves their feet and jumps, the player with the ball then ducks and moves around the defender for a shot attempt.

Examples Of How Up And Under Are Used In Commentary

1. James drives into the paint and gives the center the old up and under before making the layup.

The up and under move in basketball is very effective for a player who is a good jump shooter. If a player is able to get their jump shot going well early in the game, their defender will be more prone to falling for their shot fake, therefore allowing them to move under and around them.

Although any player on the floor can utilize this move, the up and under is extremely effective for those who are working the low post. If the offensive player can get their hook or fadeaway dropping early in the game, they can then try the up and under move for a high-percentage layup.

The Olympic Games are often defined by the feats achieved by the all-time greats. Whether it’s Jesse Owens in Berlin, Muhammed Ali in Rome, Mark Spitz … END_OF_DOCUMENT_TOKEN_TO_BE_REPLACED

Everyone has heard it: a mid-game buzzer that simultaneously causes cheering or disappointment, excitement or dread, depending on which team you're … END_OF_DOCUMENT_TOKEN_TO_BE_REPLACED

Just say the word "Madden" and football comes to mind. John Madden is a cultural icon, whether it's from his time as a Super Bowl-winning coach … END_OF_DOCUMENT_TOKEN_TO_BE_REPLACED